In 1992, when Jos and Hennie Willems started their own company, called Willems Techniek, they had no idea that many years later they and their sons Bram and Harm would own a family company that sells and installs fully automatic machines and machine lines worldwide. Turn-key projects and high-quality custom work based on a wealth of experience and knowledge.

It all started in a rental building in Reusel. Jos designed and built the machines. Hennie did the administration and took care of the children, Harm and Bram. When Jos set off for a customer, Hennie took care of goods receipt. And if extra "hands" were needed, she even cooperated in the workshop.

The first employee was added in 1993 and in 1994 a new building was built on the industrial site in Reusel. In that year, the first baler was also designed and drawn in lime. Two years later the building had to be expanded again and the first design of the semi-automatic silage baler with flat foil was created, drawn in two-dimensional in autocad. The fully automatic press / foil machines followed in 1996.

The following years the development of new machines and new markets continued, with the result that Willems quickly started looking for expansion again.

Willems was ahead of its time in terms of machinery and design and that was seen at home and abroad. The first machines were sold within Europe from 1998 and from 2003 in the United States. The name had meanwhile been changed to Willems. It was important that Jos Willems always installs the first machine in a country himself. On the basis of quality but also to experience the culture.

To meet customer demand, a building was made in Bladel. The demand from customers increasingly focused on building complete machine lines including import and supply and stacking of products. In that new building, Willems baling distinguished itself by a very modern design of machines such as a laser cutter with which they could go through the growth. 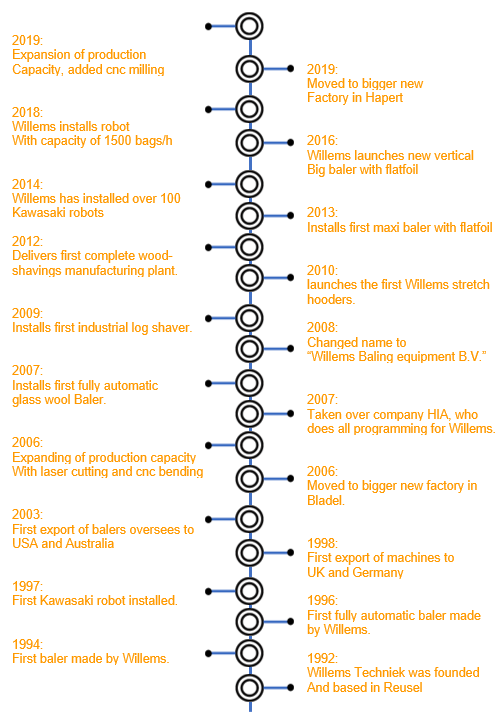 The complete machine lines that customers wanted demand for more automation for the machines. Where initially there was a collaboration with Heerkens Industrial automation in Belgium, this company was taken over in 2007 and brought under the name INDION (Industrial automation). It soon became apparent that Willems wanted to do everything in-house and INDION was housed in Willems Baling Equipment and Willems Automation.

The family business, in which Harm and Bram are now also active, had grown considerably in the meantime, but retained the values ​​that make a family business special. Such as low approachable, the social amongst each other, sending flowers to special occasions but also when an employee needs support due to circumstances. A combination of permanent and non-permanent employees. This ensures that employees are loyal and often work for Willem baling for a long time.

The social and loyal also expresses itself in support of a large number of charities in the present and past such as the Ronald Mc Donald house, the Tess Foundation and the Fast Wheel. Recently, a bouncy castle has been purchased that staff members can borrow for parties and parties.

And where is Willems Baling now:

And that has all led to a new building which is delivered mid-2019 in Hapert.

That is what makes Willem's baling so special! And where Jos Willems initially did not want to connect his name to the company, has now become a global brand name.